My interest in home cooking Asian vegan food has increased dramatically over the last two years. In fact, my interest increased so much that I have personally invested in loads of “Asian vegan cookbooks”.

Moving back to Oslo from Shanghai forced me to make a big shift in my diet. I miss Asian food so much. But I’ve desperately tried to compensate by making tasty and healthy Asian dishes in my (small) kitchen here in Norway.

It’s just something about healthy, spicy food inspired by Asian countries that make me melt. Especially if I know that the food doesn’t contain any meat or dairy products. I’m not 100 % a vegan, but I tend to make three or four vegan dinners every week now.

During my research period, I understood that there wasn’t a dedicated list online that recommended Asian cookbooks that focused on vegan food. All I found were some biased (and paid for..?) articles about one or two books from the same author.

I decided to change that. After spending hundreds of dollars on Amazon, I had one mission in mind: to tell my readers about which Asian vegan cookbooks you should buy – and which you shouldn’t buy. 🙂

I’ve done it easy for you: all the books are listed on Amazon.

I guess that’s where we all go to buy our stuff online.

When you scroll through the pictures, recipes, and text in this book, you clearly understand why it became an international bestseller.

90. That’s the number of Indian dishes that can be found in this book.

Ninety delicious recipes are more than enough to explore the beauty of vegan food from India.

The book isn’t just perfect if you want to try out some Indian vegan dishes. It also offers a great introduction to how Indians make their food in general.

Personally, I found several tips in this book that I also apply to non-vegan dishes when I want to impress someone that’s coming over for dinner.

Chinese food at its best: The Chinese vegan kitchen

When I lived in China, some vegans told me that it was hard living there as a vegan.

To me, that just reveals something about their lack of communication skills. I’m 100 % sure that it’s not the lack of delicious Chinese vegan food that made them struggle.

This cookbook taught me a lot about which vegan dishes can come out of a restaurant in Beijing. The book contains no less than 225 (!!) Chinese-inspired vegan dishes – which are all very well described.

Even though I’ve only made a handful so far, I look forward to the rest.

Vegan dishes to cook in a bowl: Vegetarian Recipes for Ramen, Pho, Bibimbap, Dumplings, and Other One-Dish Meals

When I traveled to Vietnam, I saw everyone eating some “noodle stuff” from a bowl. Apparently, that was the most famous Asian dish ever invented: pho.

A big part of South East Asian food culture is to boil water, put some ingredients in that boiling water and…make something that tastes fantastic.

I’ve never been a big fan of cooked meat. However, boiling food is one of the most efficient and less time-consuming ways to cook.

Therefore, I thought: what about cooked Asian-inspired vegan dishes?

If you want to read about Asian vegan dishes that are easy to make and contains a lot of hot water: buy this book.

This book wasn’t put on top of the list simply because it’s not the best and most precise cookbook that I’ve read (I’m just being honest here…).

But it’s the most complete book about Asian vegan dishes that can be found on the market.

This book will learn you how to cook:

If you only plan to buy one book about Asian vegan cooking, I’d probably go for this one.

As you might have already figured out, there are “only” five Asian vegan cookbooks that I can really recommend.

They are placed on the list above – and got the proper introduction they deserved.

However, there’s a handful Asian vegan cookbooks that I can mention as well: 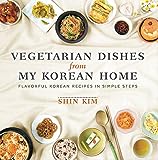 Why aren’t these Asian vegan cookbooks on the ‘absolute recommend’ list?

These books are all good, but there’s probably one or two elements why they didn’t make it to the list.

Well, below the picture that you can see below, I’ve written about my criteria for the test. That’s when you will quickly understand why some books have been recommended – and why some books are placed in the “runner’s up” list.

Also, many books have been dropped completely from this article. 🙂

I’ll be honest and upfront with you about the criteria that were used in this “test”. My recommendations are purely based on the factors that have been written below:

I probably sound very negative in this part of the article. But that’s simply because I browsed through so many bad cookbooks that simply weren’t precise or good enough.

Read this article to learn why cooking at home is eco-friendly.

✅Do many of these Asian vegan cookbooks require you to use coriander/cilantro?

I’m writing this question down because I know there are many fellow coriander haters out there.

Even though many of the recipes in these books use coriander, it’s 100 % OK to drop it. Just take the coriander out of the equation every time – and you are completely fine. Don’t worry about that soap taste at all.

✅Why are many of these cookbooks written by non-Asian people?

This is something that surprised me as well.

I spoke to a friend of mine. Her parents run a couple of Chinese restaurants in Norway. She told me that getting inspiration from an Asian food culture, but understanding the taste buds of “western people” was super helpful for the author of cookbooks.

In other words: several of these successful Asian cookbooks are written by “Western people” because they have the ability to understand what the market wants, what most people have in their kitchen, which ingredients can be bought in a normal supermarket in Europe/the US, etc.

✅Can you recommend any Asian Vegan cookbooks?

In the list on the top of this article, you will find a lot of great alternatives.

I’ve personally read them all – and have only included well-written books on the list.

Well, if you’d like to see some Asian vegan dishes being made “live”, I can recommend the video below.

The video uploaded on a Youtube channel called “East Meets Kitchen” – and it’s quite educational if you want to learn a thing or two of how to make proper Asian vegan food:

If you enjoyed this article, I think I got a couple of more that you should check out.

The more time you spend on my website, the happier I become.

Articles about food and veganism

Articles about my journeys in Asia

If you know other Asian vegan cookbooks or just want to say hello: feel free to add a comment in the comment section below. I love to connect with my readers – and I promise to answer you regardless of your request! 😉