Being inspired by quite many YouTubers (more on that later), I decided to dig deep into chess.

I bought about 10 chess books from Amazon when I started to get serious about my chess. This article both contains books I can recommend. And those that I will strongly NOT recommend you to buy. That will save you a little money. 🙂

PS! If you ever need a physical chessboard, I’ve written an article about the best wooden chess boards available. “Why wood?”, you might ask. Well – it’s because it’s an environmentally friendly material to make chess boards out of. And this is, after all, a website about sustainability. 🙂

This isn’t an article about any environmental topics. However, once I got something super useful to share, I decided to do it regardless. After all, I bet no one is reading this article thinking:

“Oh god, NO! Not another chess article on Sustainability Matters Daily!!!”

In a hurry? Here’s the top 3 chess books for beginners on Amazon

Okay, these three books are all BRILLIANT if you want to become better at chess. But don’t get me wrong. They are also VERY different from each other.

And if you put them all together, you have a high chance of mastering a lot of the game from an early stage.

Why are these chess books recommended for beginners? Let me try to explain what you will gain from each of these books. 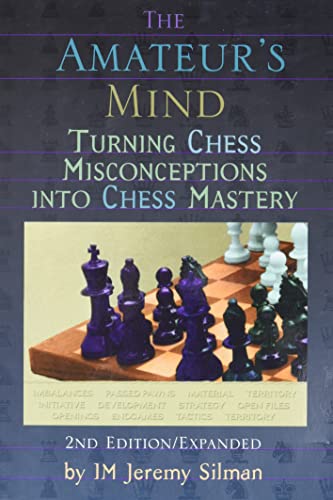 “Amateur’s Mind: Turning Chess Misconceptions into Chess Mastery” is a book you can’t live without as a newbie. I’ve read it twice. To be frank, I’m probably going to read it again.

What this book offer is unique. It doesn’t consist of numerous puzzles or hard theory. However, it goes directly into the core of what you are doing wrong with your chess as a beginner. When I read this book, I was sometimes getting a feeling that the author had already seen and analyzed my games.

And you’re probably gonna get that feeling too. 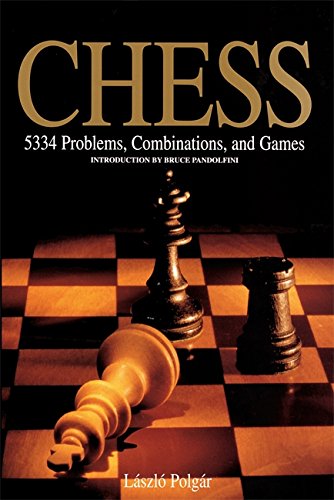 On the other hand, “Chess 5334 Problems” is a book that literally consists of a lot of chess puzzles. And it’s good. It’s easy to understand. And you can literally spend hours on this book without getting bored.

I’m a big fan of this book. After downloading several apps and seeing a lot of similar books: this is, by far, the best one I’ve seen. And that says a lot.

This book will give you loads of chess puzzles for quite a small amount of money.

PS! If you want to interact with such chess puzzles online, I will recommend you to check out “Puzzle Rush” on Chess.com. I am writing more about that feature later in the article. 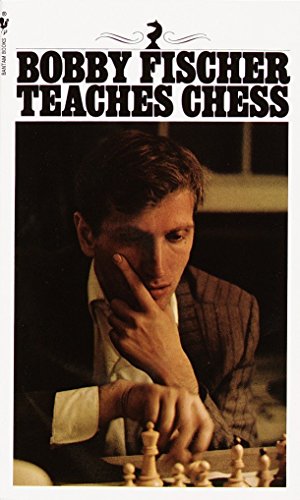 Finally, Bobby Fischer provides you with the thoughts of a mastermind. That might sound like a clichè. And it probably is.

However, this is a book that is written by one of the best chess players that ever existed. That is a fact that won’t help much by itself. But this book is easy to read and gives the reader an understanding of chess from a masterminds’ perspective.

Bobby Fischer is so good at chess that he is able to explain complicated things in a very easy manner. And that’s a skill more people should develop. 🙂 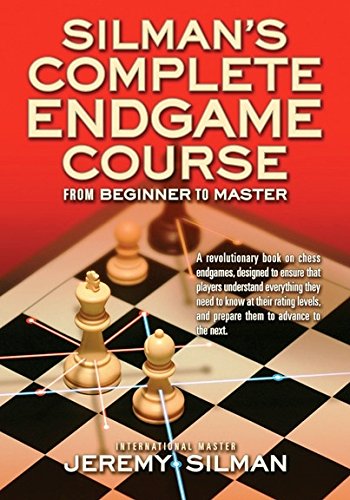 Why is “Silman’s Complete Endgame Course” recommended as well?

I was not certain whether I would recommend this chess book. However, it’s a quite unique and delicate piece that might be helpful for some of you.

Let me explain exactly what it is.

Still not sure what an endgame situation is? Let me illustrate that for you.

But believe me: its SUPER complex.

And the more you learn about how complex end games are, the better chances you have in such positions.

I was totally unaware of the importance of studying endgames before I bought this book. This book alone helped med to beat almost all players below 1500 ELO in an endgame – and I’m not even joking.

Now that you’ve read my chess beginner book recommendations, I’m going to dig a bit deeper into exactly why these books will help you with your ranking.

What makes a great chess book for beginners?

Now, books isn’t everything. There are many other ways of becoming better at chess.

And this is coming from someone who’s already been through the path that you’re struggling with. In the next paragraph, I’ll show you five useful tips to improve your chess game (in addition to reading chess books).

Read our list of the best chess blogs and influencers.

Five great tips if you want to become better at chess

This is coming from a guy who went from 800 ELO to 1300 ELO. That means I’m not an expert in chess. But I’m an expert in growing from absolute garbage to become quite an “OKish” chess player.

It’s the same with my chess level as with my Chinese level. I’m not a native Chinese speaker, but it’s super helpful to have been through the learning process in order to educate other people on how they should improve their Chinese. That’s also something I’ve written about on this website, which you can read about here.

And I got some tips I wanted to share with you:

I can’t remember how many times I got checkmated after ten moves. That will make you lose the motivation.

If you learn three-four openings that you consistently play, I can almost guarantee you that you will have more fun. And that you will start to win games.

#2: Do not play without knowing what you’re doing

When I got that message (loud and clear), it revolutionized the way I played chess. I literally went from 800 to 1000 just by skipping moves like “oh, I’ll just move the queen a bit higher on the board. It might or might not help!”.

Don’t do moves like that. Make sure that your queen is in a position that covers a lot of squares. But moving it just for the sake of moving it is the worst thing you can do.

#3: Try to keep your head calm while playing chess

I rage when I lose. And a lot of chess beginners are like me.

Losing games will, unfortunately, be a huge part of what you’re going to do for the first year. And the way you deal with that has a lot to say. If I lose one game, you can be sure that I will also lose the next three games. That type of behavior is often called “to go on a tilt”.

Try not to become emotional about the game.

I couldn’t. But I really hope you can. 🙂

If you have the budget, I would definitely hire a teacher. Mine is called Michael and comes from The Philippines. He charges 10 USD per hour, which is reasonable for me as a Norwegian.

There are many websites out there where you can hire online chess teachers. However, I’m not gonna recommend any of them as I don’t have any experience with that.

Michael was referred to me by a friend.

How to find a chess coach? Google!

It doesn’t take you many seconds to perform a Google search like this:

Just remember that being good at chess doesn’t automatically make you a good coach. There are many people rated around 2200 that are much better coaches than the absolute best players in the world. 🙂

Trust me: I’m not affiliated with Chess.com in any way (and neither will I be in the future).

But there’s one amazing premium feature that has probably done more to my chess middle and end game than anything else: Puzzle Rush.

Puzzle Rush is gameplay where you do as many chess puzzles within five minutes as possible. Three mistakes and you’re out. My record is 25, which I guess is decent. But it has learned me so much about checkmate patterns that I really want to recommend this.

These tips are all great for learning more about chess. However, there’s one more thing I would love to introduce: Chess Youtube Learning.

Probably the best channel on Youtube. And I’m not talking about chess channels, but ALL Youtube channels.

Aman Hambleton (GM) and Eric Hansen (GM) are two young, enthusiastic, and funny chess players. They do everything they can to entertain

Please note that this channel do contain a bit “harsh type of humor”. But you will quickly understand if this is something for you or not.

I’ve laughed and learned from them for about a year. And I think you should give it a try as well.

This guy really got his breakthrough on Youtube in 2020. Despite not being a GM (Grand Master), he is very good at explaining constantly what he does on the board.

Gotham is a local guy from New York that tend to play chess with some of the best players on the planet.

You can see him teaming up with Nakamura for some live stream sometimes. But his Youtube channel is really a goldmine for anyone that wants to learn basic chess principles.

Probably the nicest, calmest and most polite chess player out there. Eric Rosen is someone you just want to give a hug.

He is also an extremely good chess player. What he does best is educate the viewers while playing. Where Chessbrah let their focus be on the entertainment side of chess, Eric Rosen is very educational.

I would almost recommend sitting with a notebook while watching his videos. 😉 You might actually learn something…

Should I watch Youtube instead of reading chess books?

No, you shouldn’t. You should do both. I’ve learned SO much more from chess books compared to Youtube.

I would honestly say that Chess Youtube is more of an entertainment thing rather than an educational thing.

You might watch a 10-minute video about the queen’s’ gambit opening. But frankly, you have probably forgotten all about it after an hour.

Buying chess books is a great way to improve your chess as a beginner. And believe me: buying the right books will make your learning curve be super steep. That’s something I have personally seen with my own game.

I will really recommend you to read. However, that’s just the beginning. Playing a lot of games online is probably the best way to get better. I’m a huge fan of Puzzle rush, but playing “normal” games is also a great alternative. And it’s free.

I am not going to dictate what books you are going to buy. But I can honestly say that all the books mentioned in this article have helped me a lot as a chess player. If you have any recommendations, feel free to let me know in the comment section below!